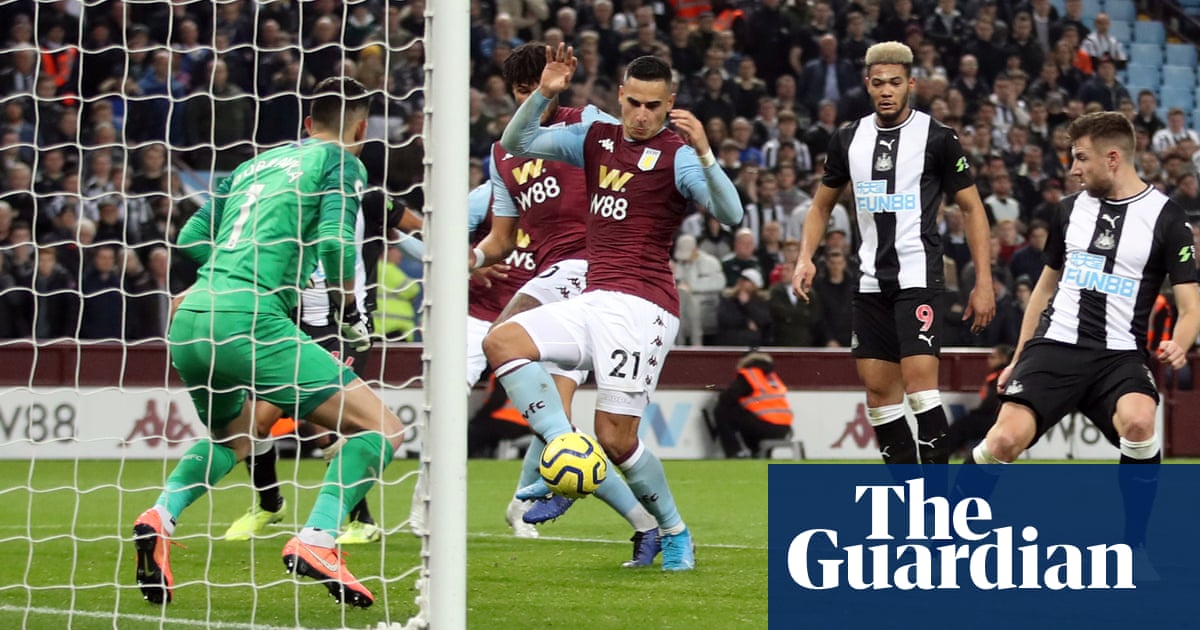 This was a fruitless return here for Steve Bruce, whose Newcastle side arrived here in promising form but left soundly beaten. Conor Hourihane opened the scoring in the first half for Aston Villa before creating a goal for Anwar El Ghazi four minutes later as the hosts claimed a deserved and important victory after three successive defeats.

It was Bruce’s first time back since his ousting as the Villa manager in October 2018, which brought an end to a two-year tenure that had degenerated into what he described as “one of the most unsavoury times of my career”.

Although results were not as rotten as the treatment of Bruce suggested, the ill-feeling of some Villa fans towards him reached such a nadir that one prize plum hurled a cabbage at the manager before what turned out to be his final game in charge.

Home fans’ antipathy towards Bruce – and the away fans’ uncertain support of him – were just two of the ingredients that gave this the potential to be a particularly tasty encounter.

Another was Newcastle fans’ eagerness to see their team inflict a defeat on Villa, whose supporters heartily mocked their counterparts on the two occasions in recent years when Villa victories here condemned Newcastle to relegation. For both teams three Premier League points represented the biggest carrot.

Villa were in more urgent need of them and their prospects were boosted by the returns of Jack Grealish and goalkeeper Tom Heaton. Their inclusions, and Hourihane’s introduction in place of Marvelous Nakamba, accounted for the three alterations to the lineup that started the defeat to Wolves.

The new Mou, Emery on the brink and a question of fish – Football Weekly

Villa have been vulnerable to counterattacks and Newcastle nearly hurt them with in the third minute Joelinton led the charge before Miguel Almirón finished in all too familiar style, wafting a shot way off target from 20 yards.

Newcastle, though, spent most of the first half defending as Villa searched for openings. Grealish created one when he dummied a pass by John McGinn into the path of Matt Targett, whose probing low cross from the left practically pleaded with a forward to tap it home. El Ghazi did not react sharply enough.

A few minutes later Targett went down on his hands and knees and vomited – not a critique of his teammates’ movement, rather a symptom of sudden illness. Apparently something about this fixture meant food kept coming up. But after a few swigs of water he was able to resume.

Villa looked more perky after that. Douglas Luiz forced a fine save from Martin Dubravka with a curling shot from 20 yards on the half-hour. But one minute later the goalkeeper had to pick the ball out of his net after Hourihane played a free-kick short to Grealish in order to improve the shooting angle and then curled a wonderful shot around the wall and in at the near post.

Five minutes later, Hourihane sent a gorgeous pass across the face of Newcastle’s goal. El Ghazi – perfectly alert this time – gave his markers the slip to finish from close range.

Heaton made sure Villa got to the interval with their two-goal lead intact, turning a header by Federico Fernández over the bar after a Newcastle corner.

Newcastle emerged for the second half on a mission of atonement. Heaton had to tip away a curling effort by Allan Saint-Maxim in the 47th minute. Villa began to get jittery.

Wesley could have settled their nerves in the 53rd minute when he was left free to meet Grealish’s corner, but Dubravka pushed away the striker’s header.

Heaton had to save from Isaac Hayden before he was left exhaling in relief after Ezri Konsa sliced a cross by Saint-Maxim just wide of his own goal.

Just after the hour Bruce reached for Plan B, replacing one of his three centre-backs with Andy Carroll as he switched to 4-4-2. The striker soon showed his menace by chesting down a cross by DeAndre Yedlin and firing a volley goalward from 16 yards. Heaton held it well.

Then it was Dubravka’s turn to excel, as he turned away a close-range effort by Wesley, who, again, should have left the keeper with no chance.

Newcastle, though, never hinted at a comeback after that.

Meat: A Threat to Our Planet? review – guaranteed to put you off your chicken nuggets

Meat: A Threat to Our Planet? review – guaranteed to put you off your chicken nuggets