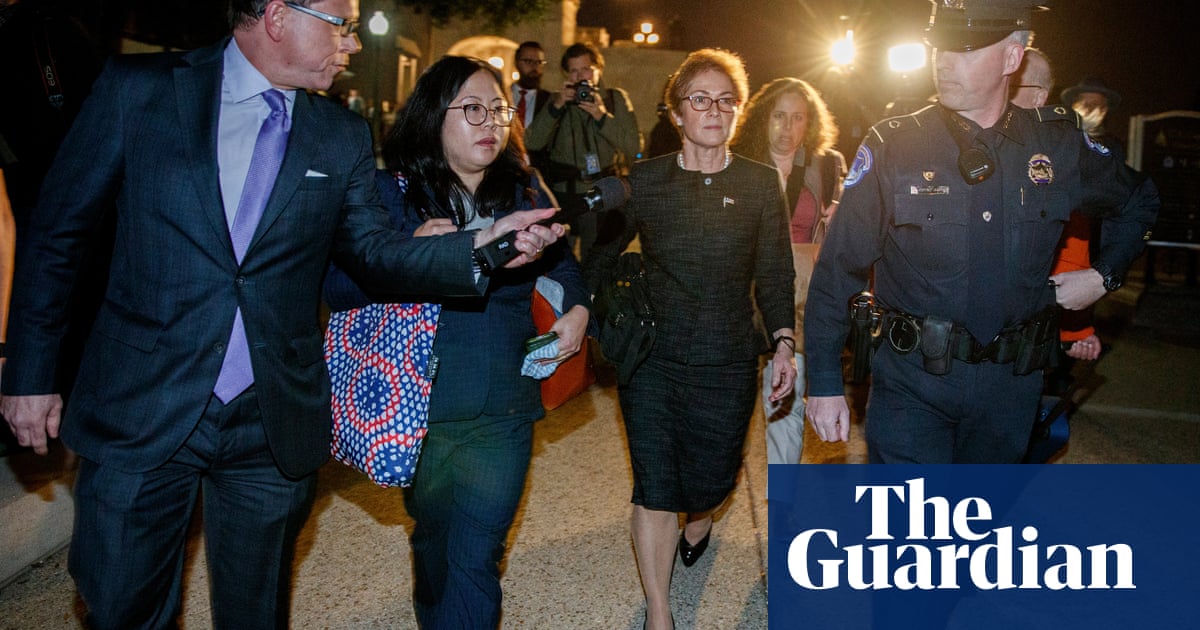 One of the diplomats, former ambassador to Ukraine Marie Yovanovitch, described her “shock” to discover that Rudy Giuliani, Trump’s personal emissary who has also worked for Ukrainian and Russian interests, was attempting to destroy her reputation.

When she sought advice on how to staunch the attack, she said, she was told to tweet something nice about Trump.

The second diplomat, P Michael McKinley, described how his dawning awareness of the White House plot to attack Biden, combined with the failure of the state department to support Yovanovitch, led him to resign.

“To see the emerging information on the engagement of our missions to procure negative political information for domestic purposes,” McKinley testified, “combined with the failure I saw in the building to provide support for our professional cadre in a particularly trying time, I think the combination was a pretty good reason to decide … I had no longer a useful role to play.”

Trump and his supporters continue to deny allegations the White House withheld almost $400m in military aid and the promise of a White House meeting until Ukraine announced investigations that could harm Biden, a frontrunner for the Democratic presidential nomination.

But a summary of a call between Trump and Ukraine’s president, Volodymyr Zelenskiy, provided evidence of a quid pro quo, which has been backed by testimony from more than a dozen officials and admitted by some Republicans – who claim it is not impeachable conduct.

The committees leading the impeachment inquiry released the transcripts as four White House officials failed to respond to subpoenas, in an abrupt escalation of Trump’s defiance of Congress.

Trump, meanwhile, sparked an outcry by beginning to lift a veil on the identity of the official whose complaint sparked the impeachment inquiry, in spite of federal laws making it a crime to threaten or take action against government whistleblowers.

“The Whistleblower got it sooo wrong that HE must come forward,” Trump tweeted on Sunday, revealing the individual’s gender and hinting at knowledge of his identity. On Monday, he said the whistleblower’s offer of written answers to Republicans’ questions was “not acceptable”.

House intelligence committee chair Adam Schiff vowed the inquiry would not be delayed.

“We may infer by the White House obstruction here, that [the officials’] testimony would be further incriminatory of the president,” Schiff told reporters. “We will continue to release the transcripts and we will soon, although I can’t give you the timetable, be moving to open hearings as well.”

Yovanovitch, a career diplomat with a reputation as a staunch anti-corruption advocate, discovered in late 2018 that Giuliani was campaigning against her, she testified.

When she sought the advice of Gordon Sondland, US ambassador to the European Union, he said: “You need to, you know, tweet out there that you support the president.

“He said: ‘You know the president. Well, maybe you don’t know him personally, but you know, you know, the sorts of things that he likes. You know, go out there battling aggressively and, you know, praise him or support him.’”

It is unclear who was paying Giuliani but he has advised two Ukrainian Americans arrested last month for campaign finance violations. Another witness described former congressman Bob Livingston, a lobbyist, campaigning against Yovanovitch.

She said she was later told secretary of state Mike Pompeo was trying to protect her from Trump: “They were worried that if I wasn’t, you know, physically out of Ukraine, that there would be, you know, some sort of public either tweet or something else from the White House.”

Yovanovich told investigators she felt “shocked” when she found Trump had said of her in his 25 July call with Zelenskiy, according to a partial White House transcript: “Well, she’s going to go through some things.”

“I didn’t know what it meant. I was very concerned,” said Yovanovitch. “I still am.”

“Did you feel threatened?” she was asked.

McKinley, a former ambassador who returned to service at the request of Pompeo, described his frustration at the state department’s refusal to support Yovanovitch.

Three times, Pompeo ignored his outrage that Yovanovitch was being hung out to dry, including a final such statement accompanying his resignation, McKinley testified.

He also said he was shocked to watch efforts inside the department to manufacture dirt abroad on a domestic political opponent.

“And if I can underscore, in 37 years in the foreign service and … working 10 years back in Washington, I had never seen that,” McKinley testified.

It’s time to throw the kitchen sink at Trump, and the cutlery too

More than a dozen current and former state, defense and White House officials have defied a Trump gag order to testify. But the parade came to a halt on Monday.

Investigators had been eager to hear from Eisenberg, who at least two witnesses have said was responsible for transferring the 25 July call summary on to a restricted network.

Eisenberg did so, according to Lt Col Alexander Vindman, a national security staffer, after Vindman approached him with concerns. Eisenberg instructed Vindman not to discuss the call with anyone, Vindman testified.

In a letter dated 3 November, a justice department lawyer argued that Eisenberg is “absolutely immune from compelled congressional testimony in his capacity as senior adviser to the president”.