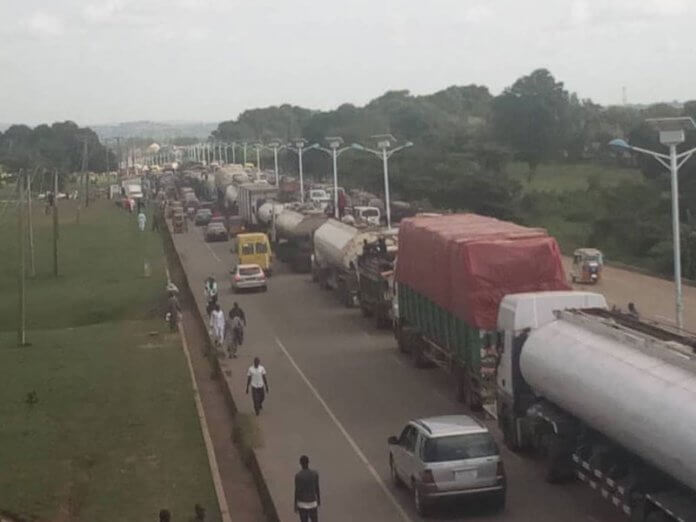 By Laleye Dipo in Minna

For the third day running, motorists have been having hectic time travelling between Minna, the Niger State capital, and Suleja, the satellite town of the Federal Capital Territory (FCT), Abuja.

This is as a result of the gridlock on the highway occasioned by poor state of the road and carelessness on the part of the drivers.

Apart from the collapse of several portions of the road because of heavy rains and heavy duty vehicles plying them, the situation has been compounded by the impatience of tanker and trailer drivers.

THISDAY investigations revealed that tragedy was averted in the outskirts of Minna when a fuel tanker ladened with 33,000 litres of petrol almost overturned when it was brushed by another fuel tanker opposite the College of Education.

The incident further paralysed the movement of vehicles to and from Minna with some motorists spending several hours on the road before getting to their destinations.

It was observed that fire fighting vehicles, ambulances and traffic wardens were despatched to the area to forestall any eventuality.

The management of some schools in Chanchaga area closed the institution for fear of an explosion from the partly overturned fuel tanker.

An official of the state Ministry of Works blamed the development on the inability of the federal government to carry out rehabilitation on the Minna – Suleja road.

The Chief Press Secretary to Governor Abubakar Sani Bello, Mary Noel Berje, when contacted, described the situation as “very sad”, saying the development is having negative effect on the social and economic lives of the people of the state.

“I am aware that the gov